COPD Symptoms Could be Alleviated With Stem Cells

Home > Blog  > COPD Symptoms Could be Alleviated With Stem Cells

17 Jan COPD Symptoms Could be Alleviated With Stem Cells

COPD is a very common lung disease, especially in patients who are chronic smokers. This condition is due to repeated damage to the lungs, leading to respiratory problems and a decreased quality of life. Stem cell therapy is being considered as a treatment for patients with COPD.

Chronic obstructive pulmonary disease (COPD) is a chronic inflammatory lung disease that causes obstructed airflow from the lungs due to damage to the alveoli. Symptoms include breathing difficulty, cough, mucus production, and wheezing. It’s caused by long-term exposure to irritating gases or particulate matter, most often from cigarette smoking. People with COPD are at an increased risk of developing heart disease, lung cancer, and a variety of other conditions. Emphysema and chronic bronchitis are the two most common conditions that contribute to COPD. Chronic bronchitis is inflammation of the lining of the bronchial tubes, which carry air to and from the air sacs, called alveoli, of the lungs. COPD symptoms often don’t appear until significant lung damage has occurred, and they usually worsen over time, particularly if smoking exposure continues. 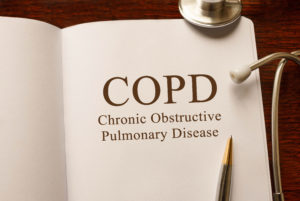 For chronic bronchitis, the main symptom is a daily cough and mucus production at least three months a year for two consecutive years. Emphysema is a condition in which the alveoli at the end of the smallest air passages, called bronchioles, of the lungs are destroyed as a result of damaging exposure to cigarette smoke and other irritating gases and particulate matter. The leading cause of COPD in developed countries is tobacco smoking. In the developing world, COPD often occurs in people exposed to fumes from burning fuel for cooking and heating in poorly ventilated homes. Only about 20 to 30 percent of chronic smokers may develop clinically apparent COPD, although many smokers with long smoking histories may develop reduced lung function.

Some smokers develop less common lung conditions. They may be misdiagnosed as having COPD until a more thorough evaluation is performed. In about 1% of people with COPD, the disease results from a genetic disorder that causes low levels of a protein called alpha-1-antitrypsin. Alpha-1-antitrypsin (AAt) is made in the liver and secreted into the bloodstream to help protect the lungs. Alpha-1-antitrypsin deficiency can affect the liver as well as the lungs. Damage to the lung can occur in infants and children, not only in adults with a history of smoking. For adults with COPD related to AAt deficiency, treatment options include those used for people with more common types of COPD. Also, replacing the missing AAt protein, which may prevent further damage to the lungs, can treat some patients. COPD is treatable and sometimes preventable. With proper management, most people with COPD can achieve good symptom control and quality of life, as well as reduced risk of other associated conditions.

How Can Stem Cell Therapy Alleviate My COPD Symptoms?

Stem cells are currently being considered as a viable treatment method for COPD patients. Some clinics offer this treatment, but the FDA has not presently approved it. It is effective in acute lung injuries, and has shown effectiveness in phase 1 clinical trials, but needs more research before it is completely safe. However, it is a promising regenerative treatment for COPD.